Speeches in Parliament Vol. (I) 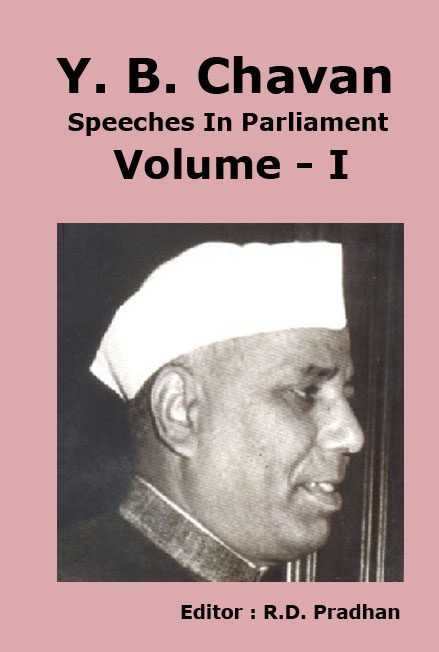 Shri Y. B. Chavan, who as a young man participated actively in the freedom struggle, emerged as one of the prominent leaders of independent India.

He spent almost half his life in the Legislature, Sixteen years between 1946 to 1962, in the Legislative Assembly of the erstwhile Bombay State and later of Maharashtra. On November 21, 1962, he was called to take over as Defence Minister of India. Till his death, 22 years later on 25 November 1984, he remained a Member of the Lok Sabha.

Y. B. Chavan was a great patriot, perspective thinker and a true democrat. He also proved himself an able administrator in all the high positions that he occupied as Chief Minister, as a Minister for Defence, Home, Finance, External Affairs as well as Deputy Prime Minister of India. He emerged a great Parliamentarian as well. With his strength of character, sense of fair play and ability to engage in repartee, he established for himself a unique place in democratic India.

Y. B. Chavan Pratishthan has undertaken a project to publish his selected speeches. His speeches in the Legislative Assembly in the State have already been published in two Volumes. Now, the Pratishthan has great pleasure in offering in two volumes Y. B. Chavan’s Selected Speeches during his tenure as Defence Minister and Union Home Minister. It is proposed to make available his other speeches in the Parliament in due course.

I am confident that Shri Y. B. Chavan’s Speeches will serve as useful reference material to students of politics and constitutional authorities. It should also prove useful to future historians.